Drive Sponsorship & Mentorship for Women in Your Organization

Women – and leaders of all genders – must advocate for themselves if they want to move their careers forward. But women in particular face leadership challenges that are embedded within larger systems. As a historically marginalized group, women often face exclusion based on their intersecting social identities, including gender, race, class, age, religion, sexual orientation, family/caregiver status, etc.

To succeed in their careers, women can’t go it alone. They need a network of champions — including mentors and sponsors.

Why Mentorship for Women Is More Important Now than Ever Before

Across the world, women have experienced unprecedented job loss, both voluntary and involuntary, due to the pandemic and its aftermath. Since COVID-19, women’s departures from the workforce have outpaced men’s across nearly every function, level, industry, and country.

More than 4 in 10 women report  they considered leaving their companies or switching jobs in 2020-2021, and  35% of the women who left or lost their jobs during the pandemic  were still unemployed as of Feb. 2022.

Even before the pandemic, women were vastly underrepresented in senior management roles, even though they outnumbered men at almost every educational level and made up about half the workforce  in most countries . For women of color, this  wage and leadership gap is even wider .

To offset the pandemic’s recent hit to women’s progress in the workforce – and continue to advance more equitable, diverse, and inclusive cultures – organizations must address the systemic imbalances that impact women. They must provide women leaders with the resources and support they need to succeed.

As noted in our book,  Kick Some Glass: 10 Ways Women Succeed at Work on Their Own Terms , the people around an individual have the ability to either support or hinder their growth towards becoming the best leader they can be. Access to influential leaders and supportive work relationships is critical to career advancement.

Therefore, a key step organizations can take towards supporting women leaders is to prioritize sponsoring and mentoring for women — particularly by influential leaders, who are often men.

Both mentors and sponsors are critical to helping aspiring women leaders gain the perspective and connections they need to take on larger roles and advance their careers.

What’s the Difference Between a Mentor and a Sponsor?

By the time they reach mid-career, most leaders can name a handful of advisers — bosses, coaches, colleagues, and friends — who’ve helped them build confidence and develop needed skills. These advisers may be mentors and/or sponsors.

While both mentors and sponsors guide professional development, there are important differences when it comes to mentorship and sponsorship in the workplace.

The Difference Between Mentorship and Sponsorship in the Workplace

Mentors provide guidance and support , whether around a specific need or for ongoing development. They listen to their mentees’ experiences and give constructive, direct, and honest feedback.

Our research has found that people who are mentored:

We also found that “mentees” have greater impact in their organizations, are perceived as being more innovative and creative, show higher resilience to setbacks, and have stronger networks. Learn more in our article, Mentoring at Work: How (and Why) to Implement It in Your Organization .

A mentor may also be a sponsor — but not necessarily. A sponsor is a specific type of mentor who goes above and beyond giving advice.

Sponsors are advocates who actively work to advance the career of their “sponsoree,” touting their accomplishments and potential, connecting them to others in their network, and recommending them for bigger roles. A sponsor pushes their “sponsoree” to take on challenging assignments and actively advances their career progression — including in off-the-record or closed-door meetings with other leaders.

Since the people who can advocate and create opportunities for others have some level of authority in an organization, they are likely upper-level leaders — people in power. And  as statistics continue to reveal , in most organizations, that pool of influencers is still primarily male.

So while sponsors are important for men, they are critical for women. Yet men are more likely than women to have sponsors.

Mentoring at all career stages is important, but without sponsors who take that next step to advocate on their behalf, women — especially women of color — are at a disadvantage.

Why Is Sponsorship in the Workplace Imbalanced Between Genders?

Since people naturally tend to gravitate to other people who are like them, male leaders may unconsciously be inclined to mentor and champion other men.

Similarly, women may not feel comfortable asking somebody several levels up — especially someone who doesn’t look like them — for advice or sponsorship. So even with no other factors at play, more men than women are sponsored, and leadership power structures remain largely unchanged.

Historically, images and ideals of leadership have been associated with stereotypically masculine qualities, and so women are less likely to be perceived as “leadership material,” as compared to men.

Research shows that  women face a double-bind of being seen as either competent or likable — but not both.

Research has also found that women receive fewer stretch assignments and more vague, personal, and unhelpful feedback than men  — preventing them from getting clear information about their performance that would push them to learn, grow, and improve.

Often, women have the right qualifications and personal readiness but still aren’t considered for a promotion or critical assignment, something we hear from leaders in our custom women’s leadership development programs . More senior leaders simply make assumptions about women’s capabilities and interests, and then make decisions for them:

These assumptions may not be conscious or spoken, but they cause women to be overlooked for roles they would be great at.

The few women who have broken through the glass ceiling often still find themselves feeling stuck because of gender bias that exists within the larger systems at play. While many women do sponsor, promote, or support the career advancement of other women, those who don’t are sometimes called “queen bees” and are considered unsupportive of other women.

But our research has found that when women executives do advocate for diversity and promote other women, they receive lower competency and performance ratings. So it’s understandable that senior women may hesitate to promote or advocate on behalf of more junior women — it may feel as if it comes at too great a personal cost. Men who sponsor or promote women aren’t similarly penalized — and may even be rewarded for supporting diversity.

To mitigate power and bias, both men and women in positions of power should mentor and sponsor talent — regardless of gender. With awareness of the reality of power and bias in everyday actions, leaders should check their thinking, adjust as needed, and call out bias whenever they see it.

Watch our webinar, Beyond Mentoring: The Critical Need to Sponsor Women in the Workplace , to learn the importance of sponsoring women and elevating them to more prominent leadership roles to leverage their talents and experience.

Why Men Are Critical Allies for Women Leaders (And Benefit from Mentoring & Sponsoring, Too)

Gender equity in the workplace  should  not  be pegged as merely a “women’s issue” and be left to women to address. Men in leadership roles are  ideally  positioned to strengthen the leadership pipeline in their organizations by helping to retain and advance talented women.

Plus, mentoring and sponsoring others offers benefits to  both  parties.  Our research found  that leaders who mentor and advocate for others have:

Our research also found that individuals who engage in mentorship and sponsorship in the workplace can build and enhance their own networks, more quickly access job-related and organizational news, and become better leaders themselves.

Some men think they wouldn’t be good at mentoring someone who’s different from them. Others may be wary of perceptions or misinterpretation of their work relationships with women.

Organizations should help combat this hesitation by encouraging all leaders – including men – to learn more about effective allyship . Share with your team our free workbook on sponsoring & mentoring women , which includes a section with tips on how men leaders can support talented women colleagues.

Women leaders need both  mentors  and  sponsors. They just need them for different things at different times.

Women leaders often view the responsibility to advance their careers or succeed in a new role as strictly their own. In our programs designed for women leaders, we often hear things such as:

Many women wrestle with these concerns and feel uncomfortable about self-promotion at work .

But without direct access to the people who can set women leaders up for the experiences they need — and the support to help them through inevitable challenges — their career progress is likely to stall, leading to short-term frustration and long-term consequences.

Help your women leaders establish a network of champions, wherever they are in their careers. Doing so will ensure they’re surrounded by people who can help them shift the way they think and act and lift them up to higher levels of influence within the organization.

Women leaders looking to take individual steps for building their networks can check out our article,  5 Networking Tips for Women .

Advancing Mentorship & Sponsorship in the Workplace for Women Leaders

Ideally, women would have the mentors they need to help them navigate their careers, and senior leaders would see their skills and potential and enthusiastically sponsor them. But, since this isn’t happening by default in most organizations, there’s a leaky pipeline of talent.

Change is complex. Organizations that want to support women need to start by looking at the larger systems in which they operate to find the root causes of women leaving or not being promoted.

Encouraging sponsoring and mentoring for women is a great place to start. Communicate to everyone in your organization that this is a priority, and provide the resources and space to put plans into action. Don’t leave it up to individual women to establish mentorship or sponsorship arrangements.

Together, we can help create a network of champions for talented women, because when more women lead, individuals thrive — and organizations are better able to embrace the challenges of the future.

Are you looking to drive sponsorship and mentorship for women in your organization? We invite you to download our complimentary guide on sponsoring & mentoring women . Or, commit to establishing a workplace environment that supports your talented women leaders with a customized  women’s leadership development program .

How to Reimagine Networking During a Pandemic (Especially for Women Leaders)

Subscribe to our eNewsletters to get the latest on cutting-edge, leadership insights & research.
SIGN UP FOR NEWSLETTERS
March 30, 2022
Leading Effectively Staff 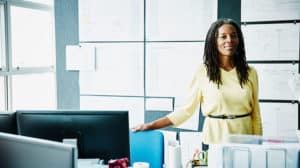 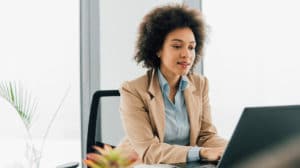